It is now four months since we completed our trial of Racing Professionals AW and gave it an approved rating.

We like to keep an eye on our winning systems here at Honest Betting Reviews rather than just reviewing products and then forgetting about them.

So how have things been going since we reviewed this tipster back in March?

Well unfortunately things have taken a turn for the worse and they have dropped 35 points since the end of our trial.

That leaves them just 20 points up after seven months of bets, which translates into a 4% ROI and 20% bank growth over that period.

Unfortunately we are going to have to downgrade Racing Professionals AW to a neutral rating.

We look for services to have an ROI over 10% to be on our approved list, unless they have exceptionally high bet volume or strike rate.

More importantly though, we would look for bank growth to be significantly higher than 20% after seven months and perhaps to have doubled or more in that time.

So all in all this one doesn’t quite justify a place on our recommended list at the moment. But who knows, they do tend to tip some big priced winners, so maybe a 100/1 winner is just around the corner…

In the meantime we will continue to keep an eye on things and see if they can pick up their form again.

You can get the Racing Professionals AW service here

Here are the final results of our three month trial of the Racing Professionals AW service:

This is a service that advises 1 point level stakes bets at Betfair SP on the All-Weather. It is a complimentary service to their principal one which runs during the main flat season on the turf.

The published results on the website are excellent, running back to 2008 and range between 100 and 478 points profit a year.

Digging a little deeper though, there are some massive priced winners that make up quite a large portion of those profits.

Still, even if you take off those massive winners they are still turning a decent profit so I started out the trial with high hopes for this service.

I began subscribing to this service on 28th November 2014 and it has been something of a rollercoaster ride to say the least over my 3 month trial!

As you might expect by looking at past results, there were some tough losing runs during the trial.

Then all of a sudden a big priced winner would pop up to turn things around.

As it did on 24th February when Atwix won at a BSP of 74! That turned what had been a losing 2015 up until then into a nicely profitable one.

Overall  a very pleasing return of 55 points, or £2,750 to £50 level stakes during the course of the trial, for what is very little work on the part of the subscriber.

You can see the kind of rollercoaster ride it was from the graph below: 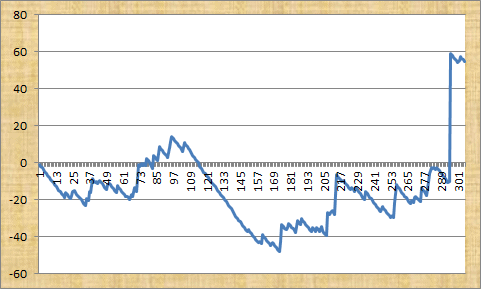 Ease of use: Good, tips are sent out by e-mail and usually arrive by midday.

Availability of prices: Excellent. I particularly like that bets are advised at Betfair SP (BSP) so no fancy prices that nobody can obtain and very little time needed to place the bets.

Strike rate: The strike rate is surprisingly high for a service that picks out such huge priced winners, being around 20-30% historically. That is basically because whilst they tip at some massive prices, they also have quite a few at odds-on – and everything in between!

Advised Betting Bank: They advise a 100 point bank, which seems a little on the low side considering we were nearly 50 points down at one stage during the trial. That would have equated to half the bank. I would think a 150 point bank would be more appropriate here.

The trial finished with a nice profit of +55 points at BSP, so good results for a couple of minutes work a day.

You could say that if it hadn’t been for that one winner at 74 BSP then the trial would have finished down.

To be fair to them though, they also had second places at over 50/1 and 20/1, so as football managers are often keen to point out, luck has a tendency to level itself out over the course of a season. That seems to have been the case here rather than them having been “bailed out” with one lucky winner.

All in all then it gets the thumbs up from me and goes onto the approved list.

It does come with a bit of a health warning though – expect some big ups and downs, this is not a ride for the feint hearted!

But a great feeling when one of those massive outsiders comes romping home.

I will continue to monitor the service and provide updates on how this one performs.

You can get the Racing Professionals AW service here