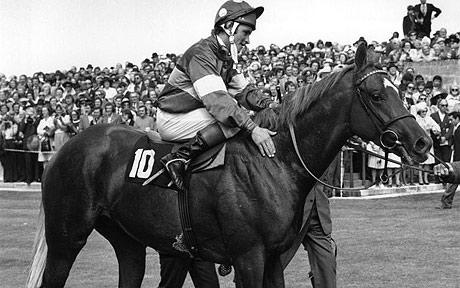 The Royal Ascot was flooded with onlookers as the race went head-to-head, literally and figuratively, between Omaha, an American thoroughbred champion most recently awarded the 1935 US Triple Crown winning title, and Quashed, a filly whose most recent win was at the Epson Oaks, a shining moment that displayed her true potential. It was 1936 in Ascot, England and the Gold Cup was in full swing, a heated battle being forged on the course, the main players and front-runners were Omaha and Quashed.

The Gold Cup, a Group 1 flat horse race held in June every year, was and still is an all-inclusive race for horses four years and older. Established in 1807, the race originally offered space for horses over three years of age. The course itself spans two miles and four furlongs, or 4,023 meters, of Ascot countryside, a beautifully lush and green expanse of rolling hills. The Ascot Racecourse, founded in 1711 by Queen Anne, would grow to be one of the most popular racecourses in England hosting a handful of Great Britain’s Group 1 horse races while also entertaining England’s high society including the royal family whose homestead, Windsor Castle, lay a mere six miles away.

The modern Ascot Racecourse sees at least twenty-six days of racing every year while providing jump racing throughout the winter months. While the most prestigious events held at the Ascot Racecourse are the King George IV and Queen Elizabeth Stakes, meetings that run throughout July, the Gold Cup in June is a highly regarded precursor.

So it was on June 18th of 1936 that there was a large crowd, estimated to be at least 150,000 heads strong, whose fascinated and enthralled attention watched the embattled thoroughbred and filly struggle to gain ground.

Omaha began the race as favorite with odds of 11/8 with eight opponents. It was noted from the onset of the race that Omaha displayed anxious behavior and had even come close to unseating his jockey, Beasley. As the race came to a right hand turn that signaled a precursor to the straight, Beasley attended to Omaha’s anxious behavior, restraining him, and was able to move ahead to challenge their most fearsome competitor, Quashed. While just a filly, Quashed showed great potential in previous races, leaving runners behind and moving forward to victory.

The two ran neck and neck leaving the other runners in the dust, clearly pulling ahead to lead the race into its final stages. With just a furlong left in the course, Omaha gained ground and leveled with his rival. Yet Quashed, underestimated due to her stature as a non-thoroughbred, gathered her gust and pulled forward to the victory of the Ascot Gold Cup.

The Observer, a British newspaper highly regarded as the oldest Sunday newspaper in the world, wrote of the race as a legendary spectacle stating “To see quashed and Omaha battle out the finish of the Ascot Gold Cup took years off a man’s life, though it was well worth it.”

While the 1936 Ascot Gold Cup is one of the most memorable races, there are many more that can compete. Sean Magee of the Observer, created a list of the ten greatest horse races of all time, included are the King George IV and Queen Elizabeth Diamond Stakes of 1975, the Belmont Stakes in 1973, and the Grand Steeplechase de Paris of 1962.

3 Steps to Becoming a Bookmaker
Scroll to top
We use cookies to ensure that we give you the best experience on our website. By continuing we assume you accept the use of cookies. AcceptPrivacy Policy