We had hoped to provide an update on Football Index Trader, a site designed to help traders maximise their gains on the “Football Stockmarket” known as Football Index (which we have previously reviewed here).

However, sadly things have been going a little pear-shaped for Football Index lately. They say a picture speaks a thousands words so here is a look at the top 8 players on the platform at the moment: 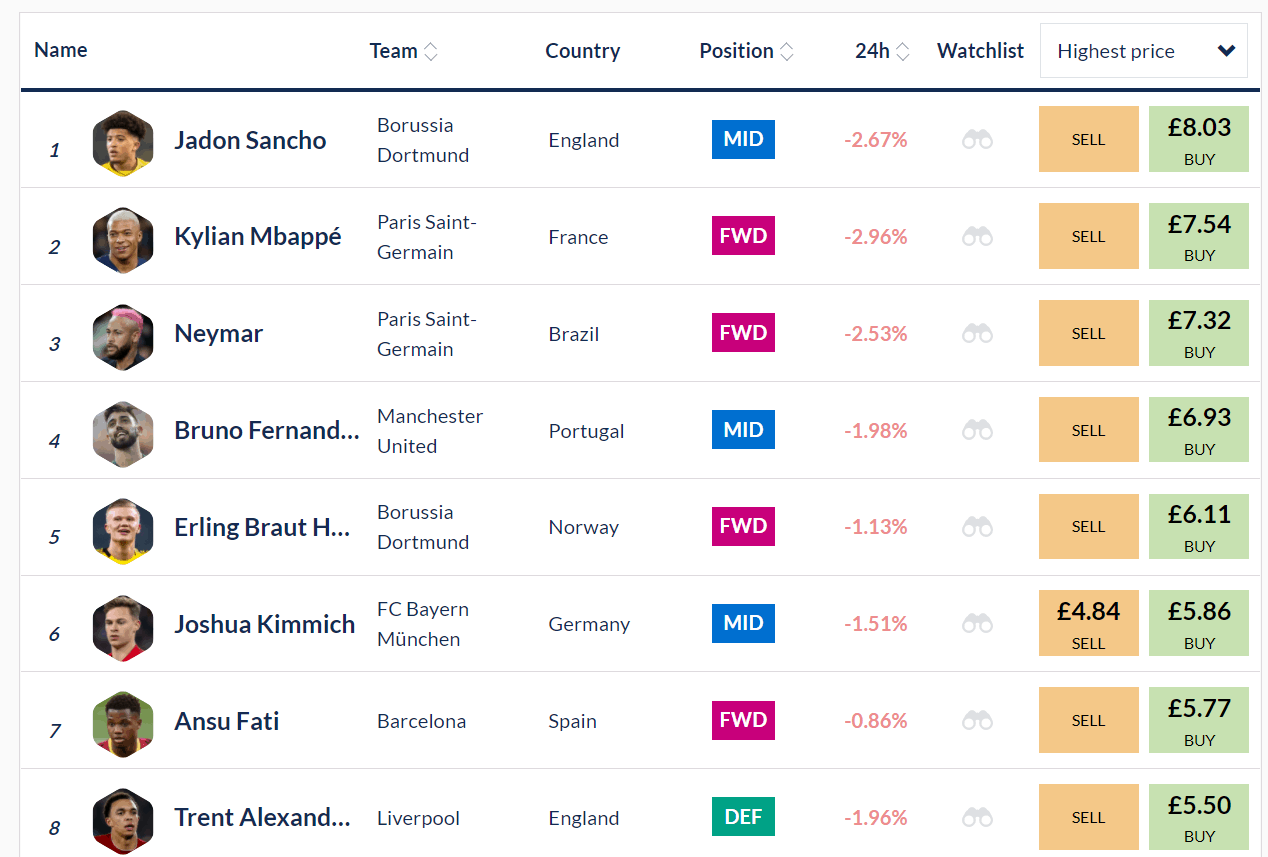 What is happening here?

Essentially lots of people want to sell their shares but no-one wants to buy. Confidence in the platform is shot and lots of people are trying to exit…but at the moment they can’t. Not a good situation. Not good at all.

Why is this happening though?

Well a few months ago Football Index changed the way the platform operated. Previously, they had a system whereby Football Index themselves would buy up shares of people who wanted to sell, in a queue system.

In doing so, they were able to maintain tight spreads (the difference between the buy and sell price) and everyone was happy because traders knew they could sell shares of players they didn’t want anymore at a reasonable price – or sell players they had made a good profit on.

We say everyone was happy. Well, not quite everyone…

No, it appears the regulator – which we assume was the UK Gambling Commission – stepped in and said they didn’t like this system as it was an artificial market. In essence Football Index were propping up the market and creating a false sense of security.

So Football Index were forced (as far as we can tell) to adopt mechanisms more akin to a normal stock market – i.e. that other traders would have to buy the shares of those who wanted to sell, not Football Index.

In order to facilitate this, Football Index introduced “Order Books.” We won’t get into the technicalities of how Order Books work, but in essence this is a bit more like a proper market, but with various limits in place in terms of what prices you can buy and sell at, to stop wild fluctuations in the market.

The problem with this forced change is that it came far too early in the life-cycle of Football Index. There just aren’t enough active traders on the platform to provide liquidity. At the moment there are around 3,000 active traders per day. Compare that to Betfair or one of the bookies who have millions of customers and you start to see the problem.

So what you had were huge spreads between the buy and sell prices – or what you have now, no sell price at all!

Football Index are making some changes later this week in an attempt to address these issues, for example by removing the restriction of only being allowed to make an offer (i.e. to sell) 1p below the buy price.

This is welcome and may help to reduce the size of the spreads. However, it does not address the more fundamental problems that FI has – the lack of traders and liquidity.

The fundamental issue is that Football Index is a long way from being a liquid platform. Around 3,000 traders per day is nothing in the grand scheme of things. We imagine they would need to treble or even 10x that to make it reasonably liquid. They say they are searching for “liquidity providers” or market makers but so far this search does not appear to be going well and we are not surprised. At the moment it would look like a big risk to any market maker.

In our own view there are three ways out of this for FI:

Without this kind of action we can’t see an easy way out of this for Football Index. Without traders paying commissions on trades, Football Index can’t pay the dividends. And without dividends there is no value in the shares and it becomes pointless. And if they cut the dividends it would send the whole platform into a death spiral.

Anxieties are high at the moment among users of Football Index as evidenced by sentiment on social media. People are worried they could lose all their money if Football Index collapses. How likely is this? It’s very difficult to tell without access to FI’s books and how much capital they have available. But clearly things are a mess at the moment and we don’t see just trundling along without some meaningful action as a viable way forward for them.

We also worry all the current mechanisms and moving parts are making FI just a bit too complicated for the everyday gambler, thus making it more difficult to attract new traders to the platform – which they desperately need and are spending lots of marketing money on. They could do with simplifying things and fixing the bugs on the platform for a start. A new competitor, Sports Stack, has a platform that already feels slicker and more user-friendly to us.

In terms of our review of Football Index Trader, obviously it does leave things in a tricky position as what use is good advice if you can’t sell any players?! Or can only sell them for a big loss, which is what we expect will happen after the changes later this week.

This is slightly compounded by the fact that Football Index Trader highlights a lot of players who are “under the radar” at the cheaper end of the market and potentially represent bargains. So we have added a number of these players to our portfolio. The trouble is these players are now harder to sell as if people want any players, it’s those at the top end who are regarded as safer and more likely to return dividends.

That is not their fault and if the market was operating properly then these players would no doubt do very well and represent value. And indeed the advice has proved accurate on many occasions in terms of highlighting players likely to perform well. It’s just at the moment it doesn’t mean a jot because you can’t sell any shares! (or not at a reasonable price, anyway).

So at the moment we couldn’t recommend anyone to put money into Football Index – and concurrently Football Index Trader. We will see what effect the changes later this week have – but we are not confident they will radically improve things, rather they are likely to cause a big drop in prices but the fundamental issues will remain.

If Football Index are able to take substantial action to improve the platform, or somehow find a market maker to provide the much-needed liquidity, then this could all change and we would at that stage recommence our review of Football Index Trader and go through what it has to offer.

For the time being though it seems best to just keep monitoring the situation until FI is in a better position and there is a realistic prospect of profiting from the platform.

We recently completed a long-term review of Football Index, a platform where you can trade futures (like shares) in footballers. It’s a platform we really like and have made quite a lot of money from so far.

Having completed our review of the platform itself, we thought it would be a good idea to have a look at some tools to help traders maximise their gains on Football Index.

We mentioned in our final review that we had recently come across a website called Football Index Trader and found it to be a very useful resource.

It seemed only right then to expand on that brief mention and give the service a proper review of its own here on the site.

So what exactly is Football Index Trader (or FIT for short)?

Well it’s more of an advice and information resource rather than “tips” or “trade signals” in the traditional form we normally test out here at Honest Betting Reviews.

The website’s main elements are:

As there aren’t any tips as such we won’t be able to record results for this review in the normal way, but thought we would still take a look at the information provided and note some of the trades we make based on that info. Members of the service will all have different results depending on how exactly they use FIT, but our results should at least give some ball-park figures of what you might expect as a member and whether the advice is helpful in achieving returns over and above the average returns of the market (normally termed “alpha” in stock market terms).

We’ve been a member for a few weeks now and have already been using the information to make some buys, so will record our findings from when we joined up rather than from today.

We will update things here as we go along and will break down the different aspects of the service during our updates.

In the meantime you can check out Football Index Trader for yourself here.

The Outside Edge – New Review
We use cookies to ensure that we give you the best experience on our website. By continuing we assume you accept the use of cookies. AcceptPrivacy Policy
Scroll to top