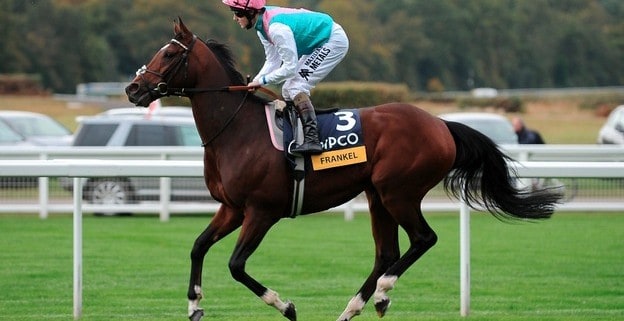 You may already know something about great race horses.  But who would you name as the world’s greatest race horse? We would throw Great Britain’s Frankel in the ring. Let’s meet him and learn his story.

Born in February 2008, in Sussex, England, the bay stallion named Frankel is the offspring of two winners. His Sire, Galileo, was the 2001 Derby winner. His Dam, Kind, was a five consecutive race winner in 2004. Both parents were born in Ireland.

Frankel’s owners named him after the successful US trainer, Bobby Frankel. His namesake stallion is the undefeated champion of flat racing. In a 14-race career, he won all 14 races. The World’s Thoroughbred Racehorse Ranking Committee ranked him the highest of any horse since they started scoring thoroughbreds in 1977. His confirmed score was 140. The next closest ranking was 138, a spread of two points. At one point, some people thought his value was more than £100 million.

Frankel’s jockey in all 14 races was Tom Queally, an Irish thoroughbred racehorse jockey, and first jockey to Henry Cecil, a British flat racing horse trainer. With a reputation as one of the greatest trainers in thoroughbred racing history, Cecil was Champion Trainer 10 times and had trained 25 classic winners as of June 2012. Cecil was Frankel’s trainer throughout his 14-race career.

Frankel’s remarkable career earned him a glorious retirement. He currently enjoys life at Banstead Manor Stud in Suffolk where he was born. Frankel commands a £125,000 stud fee for his services. In his first year at stud, Frankel covered 133 mares with a demonstrated fertility rate of 95%. In June of 2014, the stallion’s first foal sold at auction for £1.15million. Frankel’s career as a stud could go on for twenty years.

To read more about this incredible horse, read Brian Viner’s article in the Irish Examiner written before his last race in 2012. The article is “Frankel: the full story of the world’s greatest racehorse.”

Check out our detailed guide to the best free horse racing tips here.

Best Tips for Betting at the 2017 Glorious Goodwood