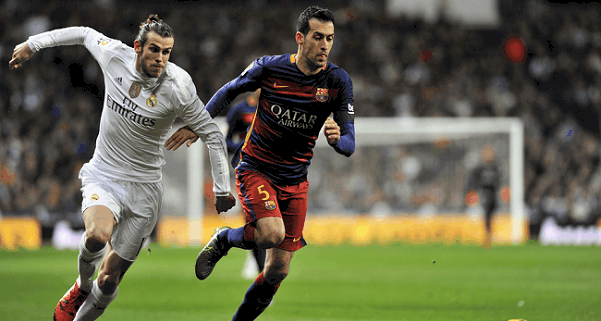 Here we will take a look at the approach of laying the correct score at half time in a football match and how you can potentially profit from this strategy.

First we will go though what it means to lay the correct score at HT and how you can set up a lay bet.

What is Laying the Correct Score at Half-Time?

Laying the correct score at HT involves using a betting exchange like Betfair or Smarkets to place bets such that you are betting against certain scorelines being the final score in a football match.

So you could lay the current score at half-time, expecting that there will be at least one goal scored in the second half.

Or you could lay more than one scoreline in the correct score market at HT, with the belief that the game is going to move in a certain direction.

Here is an example. Newcastle are playing Tottenham Hotspur in the Premier League.

It has been a fairly open game with lots of chances being created, so we think there will be goals in the second half.

We then go to the correct score market on Betfair and see that the odds on the current score of 0-0 are 5.2

So we place a lay bet of £10 and wait to see how the game unfolds. 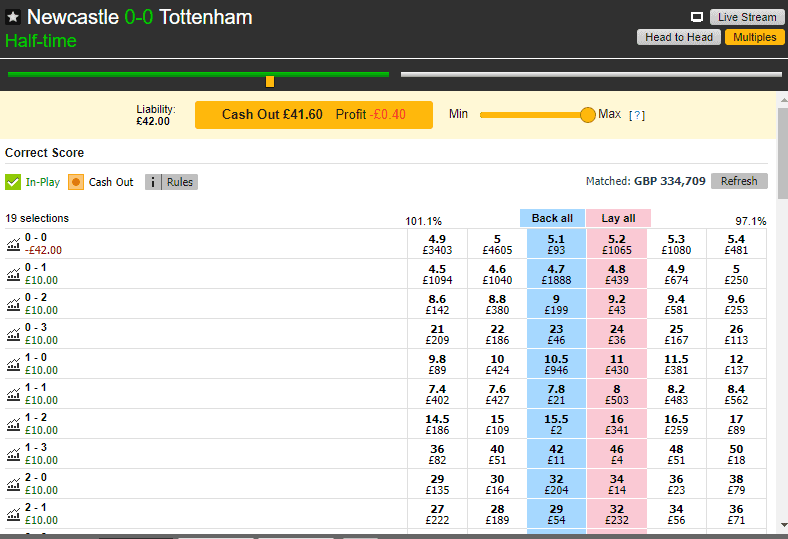 Thankfully there was a goal in the 61st minute as Spurs broke the deadlock, so the bet has won and we collected £10 of profit (minus commission).

That is a simple illustration of a lay the correct score at HT bet. Below we will look at alternative lay bets you can place.

Best Exchange for Laying the Draw at HT

We recommend the Betfair exchange for laying the draw at half time as it is the most liquid and covers the greatest number of matches. However Smarkets is catching up with Betfair so it is worth checking it out too, especially on the bigger matches as there may not be much difference and Smarkets has lower commission rates.

Another approach to laying the correct score at HT is to lay more than one scoreline if you consider that a game is likely to go a certain way.

So for example you may think that although a game is 0-0 at half-time, it is unlikely to stay that way for the second half.

This is a somewhat risky strategy as you will tend to be laying at quite high odds, but at the same time by laying three separate scores you are reducing your liability compared to just laying one.

Here is an example. It is a Champions League qualification game between Hoffenheim and Liverpool.

Liverpool lead 0-1 at HT but it is an open game and both sides are creating chances. We think there will be more goals, but we don’t think Liverpool will run away with the game, so we lay 0-1, 0-3 and also 2-2. 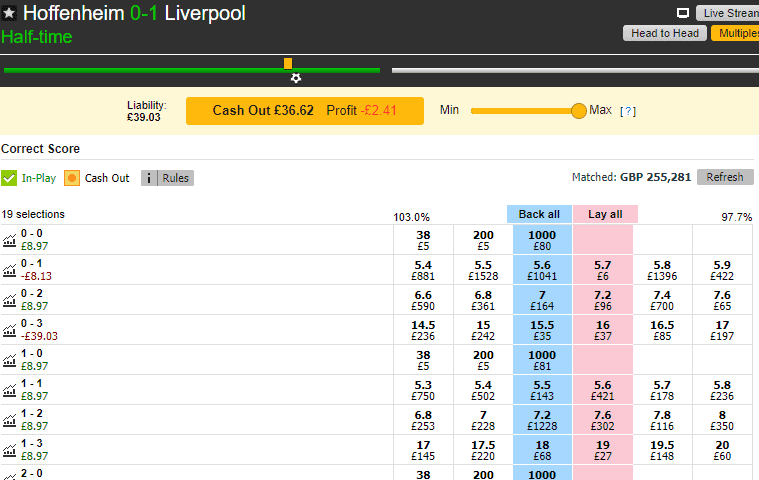 The game ends up finishing 1-2 to Liverpool and our lay bets have won. This is a good outcome for us in this match.

This shows how you can lay different scores to come up with a winning outcome.

Advantages of Laying the Correct Score at HT

Laying the correct score at HT can deliver a high percentage of winning bets, as most games will have another goal in the second half.

This can be particularly true if you focus on certain teams and certain matches, which we will look at in more detail below.

It is also the case that there tend to be more goals scored in the latter stages of a football match. This might be because teams tire towards the end, or sides may be prepared to push forward more to grab a winner.

But if you have a look at the stats, they show a strong bias towards late goals.

Here are some example from the website soccerstats, looking firstly at the Premier League:

As you can see, a much higher percentage of goals were scored towards the end of the game than earlier on.

This is the same for other leagues as well, such as Serie A in Italy:

And also from Spain’s Primera Liga:

As you can see, the numbers are very similar across different leagues, but show that a high proportion of goals are scored late on in games.

This is good news for laying the current score at HT, meaning you have a strong chance of there being a goal.

Another advantage is that it can be fun cheering on another goal, even if you don’t mind who wins the game.

Liquidity tends to be good on the correct score as well, as it is one of the most popular markets on Betfair after the main match odds and over/under markets.

So all in all there are quite a few advantages to laying the correct score at HT.

Disadvantages of Laying the Correct Score at HT

At the same time, there are some disadvantages to laying the correct score at HT.

For one, you are risking quite a bit of liability to make just a small profit. In the above example of Newcastle v Tottenham for instance, we were risking £42 to win just £10. So if one of these lays goes wrong, it can do quite a bit of damage to your bank.

The other thing is that if you have laid the current score at HT and there is not a goal, it can be very frustrating to watch the game, particularly if lots of chances are being created but not being put away. Perhaps the woodwork is being hit and the keeper is making some spectacular saves. It can be tough to take when this happens.

Our advice is to place the lay and then not to watch the game after that. This way you won’t suffer the emotions of the ups and downs of the game and so are less likely to lose control of your betting. It will help you to stay calmer and focused.

Beware also that different leagues and teams are substantially different to how they approach a game of football. The Greek league, for example, is notoriously low scoring and you may find that there are fewer second half goals than in free-scoring leagues such as the Dutch Eredivisie, the Bundesliga or the English Premier League.

Strategies for Laying the Correct Score at HT

If you are looking for a strategy to laying the correct score at HT, a good place to start could be the soccerstats website.

If you select a league and then under the heading for that league where there are certain tabs, select “Timing,” you will be presented with a table with each team’s goals by 15 minute segment and by half.

Below is an example from the English Premier League: 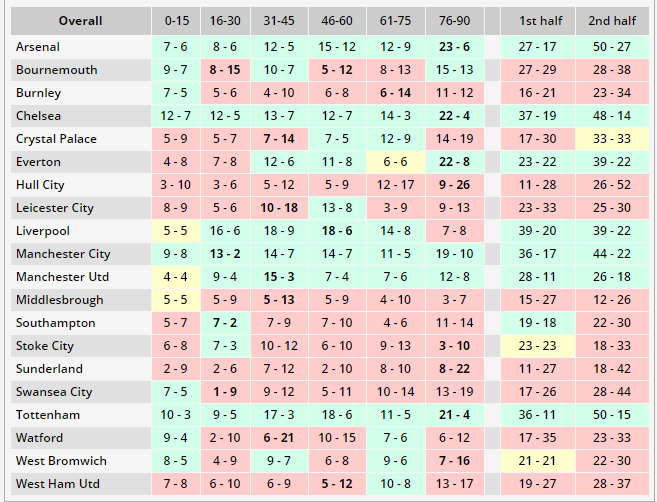 This will give you an idea of which teams tend to score and concede lots of goals in the second half of games, making them excellent choices for laying the correct score at half time.

For example, in the table you will see that Arsenal scored an amazing 50 goals in the second half of games compared to 27 in the first half, meaning they had a high number of games where the score at HT was not the score at the end of the game.

Similarly, Hull City conceded a shocking 52 goals in the second half of matches, meaning they would also have been good candidates for the lay bet.

Using statistics like this can help you identify which teams may present value in the correct score market.

Another approach to laying the correct score can be to use tools to help you rather than doing research yourself.

Alternatively, you may wish to look at In-Play Trading, which is a scanner that follows matches live and tracks how many chances are being created, shots taken, corners gained etc and then awards a rating based on that.

So those matches with a high rating indicate pressure is being put on and a goal is likely to come soon. These can be good matches to lay the correct score in, as generally goals tend to follow when a lot of pressure is being created. It obviously won’t happen all the time, but at least you have an edge over other punters in being able to use these stats to your advantage.

Laying the correct score at HT is an interesting bet to take on and is not without its risks. You are generally laying at quite high odds, so beware that you can lose quite a bit of your bank if the bet goes against you.

However, with some use of stats and betting tools, you can give yourself an edge over other punters and potentially profit from the market.

If you are going to bet on it, make sure you use sensible money management and only risk what you can afford to lose.

Good luck with your laying and we hope you have found this guide useful.

BTTS (Both Teams To Score) – Explained

Ladbrokes Goal Crazy – Explained
Scroll to top
We use cookies to ensure that we give you the best experience on our website. By continuing we assume you accept the use of cookies. AcceptPrivacy Policy