We have come to the end of our trial of Lucky 7 Naps and here are the final results:

One of the things we pay most attention to when reviewing a service is ensuring that it is practical to follow for you good folk who read our reviews.

There is no point in a service achieving fantastic results at their advised prices, only for you to sign up and find out you can’t get anything like the advised prices and struggle to make a profit.

Well sadly in the case of Lucky 7 Naps, that has been exactly the scenario.

Whilst they have made a startling 449 points profit at advised prices, they have in fact made an 80 point loss at Betfair SP.

Now normally we would expect there to be a bit of a difference between advised prices and Betfair SP results. We would say a 25-35% difference would be acceptable.

Looking at two recent successful reviews for example, Master Racing Tipster and Big Race Bookie Busters, there was a 32% and 31% difference respectively between their advised prices and Betfair SP results.

In the case of Lucky 7 Naps however, the difference is over 100%! That’s because the Betfair SP is a minus number so we are talking about a minus percentage!

We are not mathematicians, but let’s just say the difference is over 100% and basically means the service has made a substantial loss at Betfair SP, meaning we don’t think the service is practical to follow at Betfair SP.

Here are the Betfair SP results in graph format anyway: 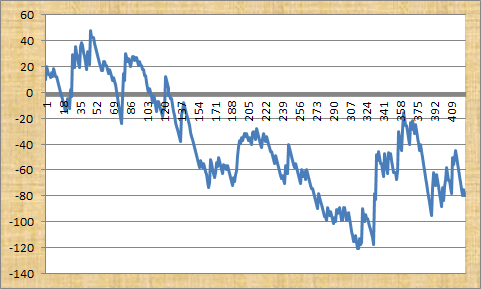 As you can see, after a good start, it went quite steeply into negative territory and despite a rally late on, still ended up 80 points down.

So if you exclude backing at Betfair SP, what about trying to match the advised prices?

Well unfortunately we found that incredibly difficult as well. Often prices would crash as soon as the e-mail containing the tips was sent out.

By the time we had logged onto Oddschecker, found the best price, logged into the relevant bookie and found the race, the price would have crashed. In some cases it would have halved in just a few minutes.

As the comments below by some of our readers suggests, that is very frustrating and we found this service a trying one to follow to say the least.

We are not sure if prices crash because the service is so popular, because bookies slash the prices as soon as they see the e-mail, or whether the tips are due to information being passed on and the insiders have already backed the tips. But whatever the reason, the prices were simply unobtainable the majority of the time.

At advised prices, we just about broke even over the trial – and that involved a lot of work just to achieve that.

Ease of use: As above – quite tough. Leaving aside the aforementioned problem with prices, there are on average 4.6 bets per day, so you will be quite busy placing the bets and finding the best prices before they disappear.

Availability of prices: As we have said, very poor. Prices tend to crash very quickly and we found often as soon as we had logged into our bookie accounts after receiving the e-mail. Expect 30-50% drops in prices quite regularly.

Strike rate: The strike rate during the trial was 25%, which was ok and about in line with the long-term results we believe.

Advised Betting Bank: The advised bank was 300 points, which seems reasonable as staking is normally 5 points per bet. As Betfair SP the bank reduced by 27% over the trial.

This is a difficult service to give an overall verdict on.

On the one hand, we were tempted to give it a failed rating, based on the 80 point loss at Betfair SP and the frustrations at trying to get the prices matched.

However, to be fair if you really tried hard you might just have eeked out a profit during the period we conducted our trial, if you were really on the ball and acted the very second you received the e-mail.

In reality, we expect most people would have done as we did and broke even or made a small loss.

So whilst we cannot recommend this service and found it difficult to follow, we do not believe it deserves an outright fail either.

We believe only services that make a big loss at all price levels should receive a failed rating and this one didn’t do that.

So on balance a neutral rating seems the fairest verdict, but with a substantial health warning that prices are very difficult to obtain.

If you fancy chancing your arm, you can check out Lucky 7 Naps here

Magic from the Master
Scroll to top