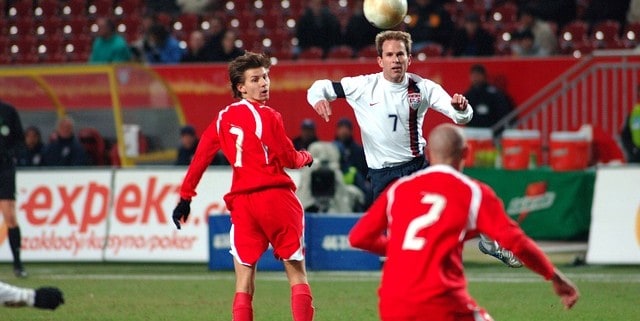 Perhaps the best known of all football trading strategies is the “lay the draw” strategy.

Although its exact origins are unknown and a few different traders claim they invented it, the strategy of laying the draw on the exchanges appears to have arisen shortly after the formation of Betfair in 1999 and spread around the internet in the early 2000s.

Quite a few people cottoned on to the fact that when a goal was scored in a football match, the odds on the draw would jump upwards, sometimes quite dramatically.

With the advent of the betting exchanges such as Betfair, this meant you could simply lay the draw in any football match – without any idea of who was going to actually win the game – and as soon as a goal was scored you could close out your bet for a profit.

Here is an example of the method in action, with a very simple lay the draw trade:

This is a match between Leverkusen and Roma in the Champions League. This is a game we expect will have lots of goals based on the teams’ recent form and scoring records.

The odds on the draw before the start of the match are 3.95 to lay. 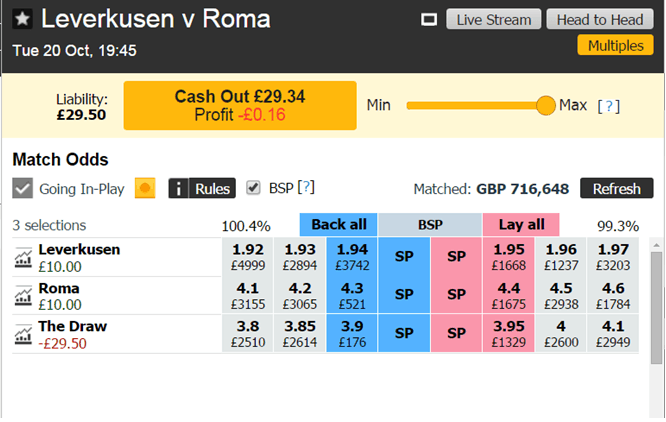 Now the game goes in-running and we await the first goal.

Boom! After 3 minutes, Leverkusen score to make it 1-0.

Now just look at what happens to the odds of the draw on Betfair: 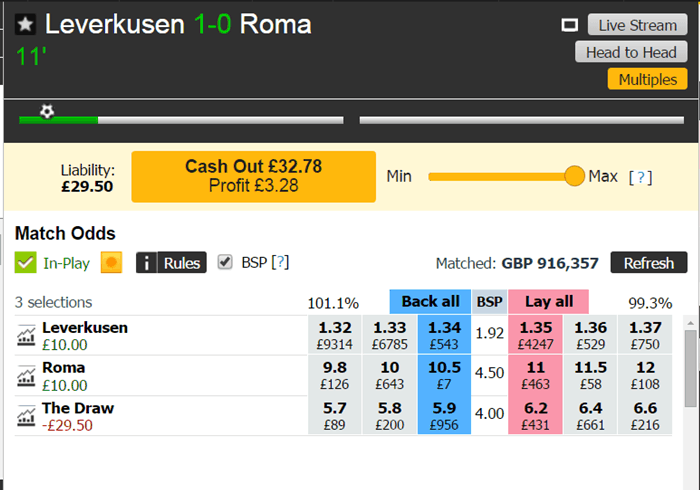 The odds on the draw have moved out to around 5.9 from their original price of 3.95.

That means we can lock in a guaranteed profit of £3.28 (which equates to 32.8% profit on our lay stake) by simply clicking on the “Cash Out” button. Easy-peasy! 🙂

Best Exchange for Lay the Draw

We recommend the Betfair exchange for lay the draw trading as it is the most liquid and covers the greatest number of matches.

These days Smarkets often also has good liquidity on big matches, although doesn’t tend to have the same liquidity on the more niche markets.

What Sort of Games to Use Lay the Draw In

There are three principal criteria we focus on when selecting matches to trade the lay the draw strategy in.

The first point we want to make sure of is that there is enough liquidity for us to trade out our bet when a goal is scored. So we focus on matches where at least £30,000 has been matched pre-kick-off in the match odds market on Betfair or other exchange you use.

Here is an example: 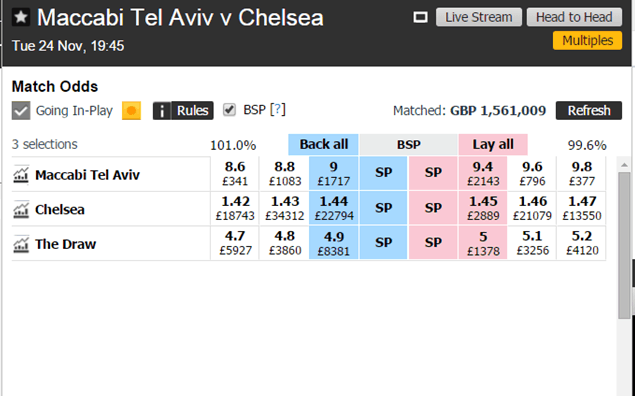 In this game you will see that over £1.5m has been matched on the game before kick-off, which is excellent liquidity and means it will be a good game to trade.

This strategy works in games where there are likely to be goals. It therefore goes without saying that we want to select high-scoring matches.

So how do we determine whether a match is likely to have any goals?

Well, we can go to a website like soccerstats.com, and have a look at how many goals both teams score and concede per game and how many of their games finish with more than 2 goals (i.e. over 2.5 goals).

An easier and quicker approach though is to look at the correct score market for the same match. This will tell us the likelihood of there being a goal.

Ideally we are looking for games where the odds on the game finishing 0-0 – and therefore of our trade losing – are more than 15.0.

That means there is a less than 7% chance that the game will finish 0-0 and gives us good prospects of a winning trade – over 93% in fact.

So we go to the correct score market and have a look at the 0-0 odds: 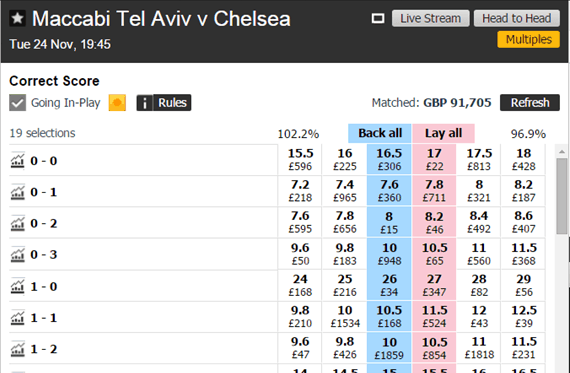 Here you will see the 0-0 is 16.5 to back. Excellent, that is what we were looking for. This is potentially a game to lay the draw in.

We believe the real skill of lay the draw trading is in selecting matches where teams are likely to win by big scores – 3-1 or 4-2.

The Dutch and German leagues are particularly good for such games, but do take some time studying sites like soccerstats.com and finding out which teams have an affinity for these high-scoring matches.

These are the matches that will really enable you to profit from laying the draw.

The types of games you choose to use the lay the draw in will depend to a certain extent on your approach to risk.

Personally, we like to stick to matches where the chances of losing are as low as possible.

We therefore stick to matches where the draw is priced at between 3.5 and 5 before kick-off.

Here is an example: 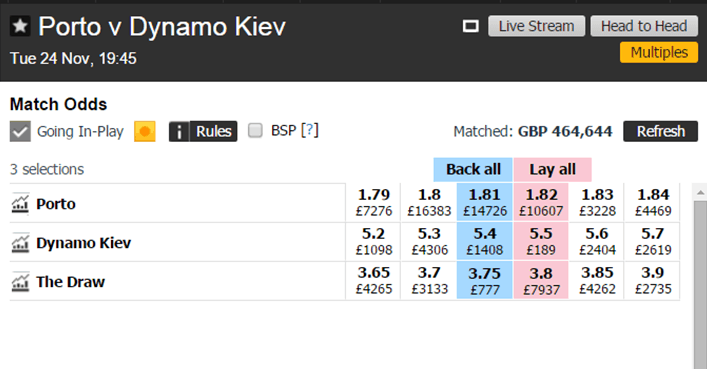 This is quite an even game, in that the draw odds are 3.75, which gives us scope to trade if there is a goal, particularly if the first goal goes to Porto.

The reason for choosing at least 3.5 is that generally speaking, you will struggle to find many matches where the match odds are below 3.5 if the 0-0 is above 15.0. If it is likely to be high scoring, then naturally the chances of it being a draw – and particularly 0-0 – are less. So it is factored into the draw price to some extent.

What we want to avoid though are those very small number of matches where for one reason or another the teams have an interest in playing for the draw.

Perhaps they will both qualify for the next round of a tournament with a draw, or it is one of those “dodgy” matches you sometimes see in Italy where the draw price is spectacularly lower than it should be (like 2.0 for example).

In our experience, when the draw is priced very low and looks suspiciously low, it is one to avoid. It could be fixed, or it could just be a perception that it might be. But in any case it is best to avoid.

On the other side of things, we tend to stick to matches where the draw odds are below 5.0 to try and ensure we make a profit – or at worst a small loss – if there is a goal.

What tends to happen if there is a strong favourite in a match is that if the underdog scores, the draw price will actually come in – leaving you in a losing position on the trade.

We prefer though to include some matches between 4.0 and 5.0 where we consider there is a strong chance the favourite will score first and even if they don’t, the losses won’t be too bad. Anything above 5.0 though and you are talking about quite a significant loss if the underdog scores first.

To summarise then, these are the three criteria to focus on when selecting matches to trade. We focus on matches where:

What to do if it Goes Wrong – and Right

Of course, nothing in life is as simple as we would like and inevitably some of the trades will go wrong. Here we set out our strategy for dealing with things if they go wrong – and some suggestions for if they go right.

There Is No Goal

Even when you pick matches where lots of goals are predicted, in some instances there will be a deadlock and neither side is able to break through.

The recommended option in such scenarios is to wait until the match hits 70 minutes or the draw odds hit 2.0 (whichever is the earlier) and then trade out.

Usually you will lose approximately 50% of your stake when this happens. It is frustrating when it happens but is part of the game. If we select matches carefully then it should not happen very often.

The other option is just to let the game run until full time and take the full loss if it stays 0-0. This is risky however and in our experience, if there have been no goals by 70 minutes in game then usually it will finish 0-0, so we find it better to trade out.

In matches where the draw odds are above 4.0, then generally if the underdog scores first, the draw odds will actually move inwards, putting you in a losing position on your trade.

In such instances, you can either trade out straight away and accept that it has gone against you this time.

Or you can stay in the game. The underdog may actually be dominating the game and you think it is more likely they will score again to make it 2-0, giving you a winning trade. Or it may be very early on in the game, and there is a good chance the favourite may turn things around and even go 2-1 up by half-time.

Some people even suggest laying the underdog when they score first – leaving a potential profit or at least break-even if the favourite does, as expected, equalise. This strategy became known as the “meltatone” in football trading circles.

However, we do not advocate such an approach. If the underdog scores again, you will be an even worse position, as whilst the draw odds will increase slightly, the underdog odds will crash.

If the match stays at 1-0, then the underdog odds will continue to fall whilst the draw stays roughly the same, again leaving you in a worse position.

No, we believe it is best not to risk making things worse, but to either trade out when the underdog scores first or allow a little bit of time for things to change, if the circumstances of the match suggest doing that.

Of course in lots of instances the favourite will score first and we have the option to either trade out there and then and take our profit, or to let the bet run and see if they can score a second goal.

We usually look closely at how the match is going, how many chances the favourite is creating and their record that season in going on and winning games by more than one goal. If the stats look good, we will let the game run until half time or a little after to see if they can bag a second goal.

If they do then the draw odds will really rocket allowing you to pocket a handsome profit from the trade.

Lay the draw is perhaps the best known and most popular football trading strategy on the betting exchanges.

It can be profitable, but like most betting and trading systems, it is as much about the way you trade it as about the system itself.

If you select the right kinds of matches, with high-scoring teams that like to play attacking football and win games 3-1, 4-2, 5-2 and so on, then it can be work well, particularly if you “ride the wave” to half time and allow the possibility of a 2-0 scoreline.

However, you have to stay disciplined and stick to the rules you choose to trade the system. Do not go outside them and allow fear or greed to dictate your decisions – that will be the quickest way to the poor house.

Take your time, learn the system and allow your bank to grow slowly and steadily over time. And most of all, only risk money you can afford to lose. After all, even with a good strategy, there are no guarantees of success in this game.

As an alternative to laying the draw, turn the tables and see how this system made over $100,000 from betting on the draw.